Music is My Muse 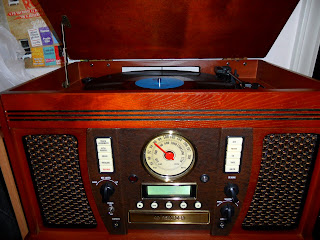 One of the best gifts I asked for, and received this Christmas, besides the Zumba2 game for Wii, was a vinyl/cassette to CD recorder. Best...invention...evah! This weekend was the first time I actually had a spare couple of hours to fiddle around with it. First thing I did was comb through my huge collection of records. Since the manual states that the needle only lasts for approximately 50 hours (what does it do after that, explode?) I thought I would need to be discriminating with my choices.

Naturally, the first records I chose were ones that I couldn't easily, or at all, get on CD. I chose The Leather Nun, The Swans and a Patti Smith Group bootleg. When I slid the bootleg out of it's cardboard case I found another little surprise...a press picture autographed by Lenny Kaye. I don't even remember where/when/how I got it, but he wrote, "Fight the Good Fight!" Love always, Lenny Kaye. 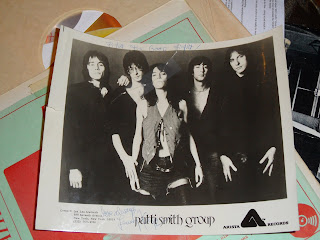 I checked the first CD to make sure I did it correctly and was astounded at the clear quality of sound. I expected to hear a lot of static and/or muddled audio, but it was just fine. I always took care of my records so maybe that's why. My compilation tapes may be another story.

The next two LP's, the Swans' "The Burning World" and The Leather Nun's "Alive" were records I played constantly in the 80's. I was introduced to the bands from my second husband, a Dane who happened to be a musician and author. He was a good musician, but I couldn't tell you about his books since except for the dedication to me in one of them, they were all in Danish.

Anyway, as I began recording them I found myself actually weeping. Yes, weeping. Memories, good and bad, brought me back to a past life. A life where the only pain I endured was of the mental kind, and usually self-inflicted. I find listening to music is more potent in jogging my mind into action than looking at any photographs would be. Music is my muse. And this was exactly what I needed.

When I wrote my first book. I always had music playing in the background. My band of choice was the Kings of Leon. With so many revisions I was fortunate they kept releasing new albums. Yes, I still say albums even if they're CD's. I've been pondering what music would be accompanying me on my short story journey. Deciding that is just as important, or more important to me, as creating an outline is to other writers.

Based on the subject of the short story, a Valentine, well actually an anti-Valentine one, both The Leather Nun and the Swans fit the bill perfectly. I'm very excited to get underway so if you are wondering where I am "hiding" in the next couple of weeks, hopefully I'll be hiding behind a keyboard, that this time will not have blood spilled onto it.

"When, When We Were Young
We Had No History
So Nothing To Lose
Meant We Could Choose
Choose What We Wanted Then
Without Any Fear
Or Thought Of Revenge"