I was the first in my family to have my DNA tested through 23andMe. I'm sure most of you know what that is but for those who do not, it's a company that will tell you where your ancestors come from, how much percentage you carry of different countries your ancestors hailed from, a timeline of when they first show up, and more importantly to me, are the health reports that they generate. The kit comes with a vial that you spit in, close, shake, and send off to the company. 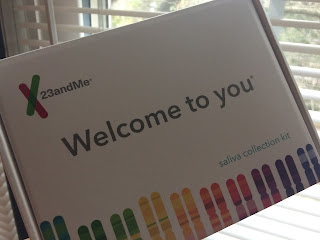 As I chose to take part in both ancestry as well as health reports it cost $199. If you do ancestry alone it's $99, and they run specials now and then, up to 20% off. It takes about four to six weeks, sometimes sooner to get the results via email.

I always thought I was mostly Italian with perhaps some Norman mixed in as a relative on my Dad's side had completed genealogical research which went back to the 1400's and had something to do with Normans going through Spain and into Italy. The most distinguished DiRosa (originally spelled with an i not e) was a Senator in Naples. If you know anything about Naples during that time period, you know they were pretty much out of control, so I'm not surprised. I mean living on the side of a volcano that can erupt at any moment can make one "carefree." I also suspected there might be a little Genghis Khan in me because my daughter had a little blueish birthmark on her backside when she was born and I read somewhere along the line that mark was present in descendants of Khan.

Here are my results which shows I am mostly Italian, actually 88.5% Southern European and I'm assuming the Broadly Southern European probably is Sicily as that's where all four of my grandparents were born. North African and Middle Eastern make sense too as everybody raided Sicily. I was surprised to see that yes, maybe I am a descendent of Khan as I have .3% Mongolian. I found the Broadly East Asian .1% surprising as well as the unassigned .8%. 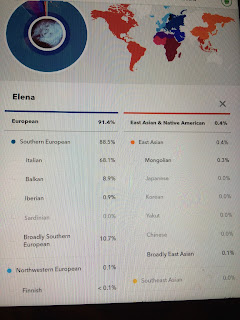 Here is my timeline which is very surprising to me. 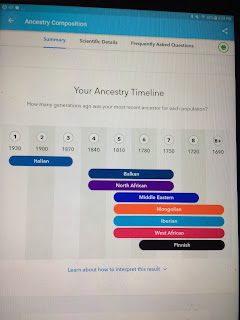 It makes sense that my Grandparents hailed from Italy between 1870-1930, but there is nothing between the years 1840-1870. My very first ancestor supposedly is Finnish followed by West African. So does that mean a ship left Finland and wound up in West Africa? Did my ancestor have something to do with slavery or did he/she marry an African Queen/King?

The next family member to do 23andMe was my daughter which shows she shares 50% of her DNA with me. I was very curious to have her spit in a bottle because there was some disparity between my husband's relatives as what ancestry they are. Many years ago when my daughter was diagnosed with MHE I tried to find out as much genetic info as I could. Since my husband was adopted and hadn't stayed in touch with his biological father's side, he didn't have any information on them so we turned to his mom. When she said my husband's grandmother on his father's side was Cherokee I was elated as that would mean my daughter was about 25% or 12.5% Cherokee which entitled her to a bevy of free medical treatments for her rare disease. His mom also said his grandfather on her side, her father,  was half-Japanese, which was cool. My husband knew that grandfather very well and said he would never speak of that side. I've seen pics of his grandparents and his grandfather does not look Japanese at all while his grandmother does look German.

Back to the Native American gene...We actually went on a trip to Cherokee, NC to look at the rolls to see if we could verify my husband's heritage. It was a bust, and it was then I decided I needed to reach out to his biological dad's side. His father had already passed many years prior but he still had a brother who I tracked down and sent a letter. To make a long story short they were thrilled I contacted them and were joyful they finally got the opportunity to reconnect with my husband who they hadn't seen since he was 6 years old and only for a moment at 18 at his dad's funeral. Since my contact with them we have become very close and they are truly wonderful people. Anyway back to the heritage. When I told his uncle that I needed some sort of verification about their Cherokee lineage he laughed and said they weren't Cherokee at all. Huh? No, my husband's grandparents were actually Polish!

His uncle was big into genealogy and had reams of pages on their family which first entered America on the Mayflower, the Southwicks, he said. He also said that Teddy and Franklin Roosevelt were distant cousins of my husband. All very interesting but not a Native American among them!

When my daughter's 23andMe results came back it showed she was 98.4% European. She has a percentage of all my ancestors except for Finnish, Middle Eastern, Mongolian, and Broadly Sub-Saharan Africa.  Her majority, not from my side, is Northwestern Europe which included 12.7% British & Irish, 7.5% French & German, and 10.2% Broadly Northeast European which I would assume was Polish. She also showed <.1% Ashkenazi Jewish, and since I had 0% I figured that was from her father's side. What was odd to me was that she had 0% Japanese! The only East Asian she had was .2%, with .1% Yakut.  I had .4% East Asian and 0 Yakut.

When the kids bought their dad a 23andMe kit for Christmas I think I was more excited than he was to find out his ancestry. Well, we got the results last week. Our daughter is his with her carrying 49.9% of his DNA. So where is the other .1%???

Here is a snapshot of some of his results: 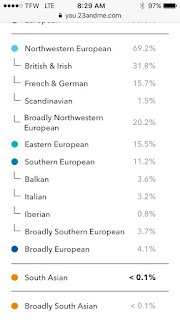 As you can see he is listed as 100% European with the majority of his ancestry, 69.2% Northwestern European broken down as 31.8% British & Irish, 15.7% French & German, 1.5% Scandinavian, 20.2% Broadly Northeast European. The rest is Eastern European. Most notable are two things...first, the 0% Ashkenazi Jewish. If I have 0 and he has 0 how does our daughter have <.1% Ashkenazi? Second, no Japanese! How can that be? His mother told him his grandfather was half Japanese. Shouldn't there be at least a small percentage? He was told stories of how his mother, her sisters and his grandmother were almost rounded up and sent to Japanese interment camps even though his "half-Japanese" grandfather worked in the Brooklyn Navy yards during the war. There is even a letter floating around somewhere whereby the government apologized.

According to my husband's timeline either his parent, grandparent or great grandparent was 100% British & Irish and born between 1870 & 1930. He adamantly says this is incorrect. Besides, as we all know no one is really 100% anything!

This is our wall of ancestors... 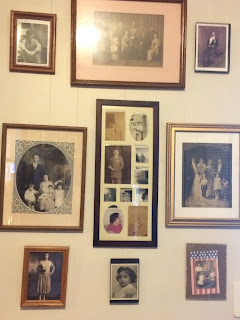 At the very top is a photo is of my husband's ancestors on his grandfather's side, all Japanese in traditional dress. I do not know the year of this photo. 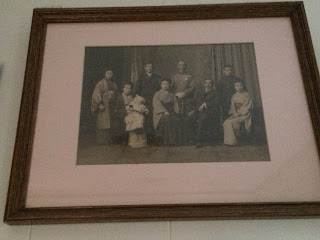 So, who are these people? Are they not his relatives? Who do we believe? DNA or oral histories? Did 23andMe get it all wrong? And if they got the ancestry side wrong, what about the health reports? How accurate are they? I had hoped this DNA testing would answer some questions, but in fact it's given me even more...23andWho???

Ice looks beautiful, but it's pretty treacherous out there if you have to walk or drive in it. There's also a good chance I'm going to lose electricity when the heavy branches topple an electric wire somewhere down the line. Here's some shots from the comfort of my driveway and back patio. 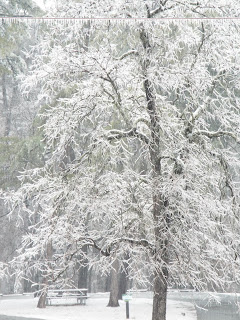 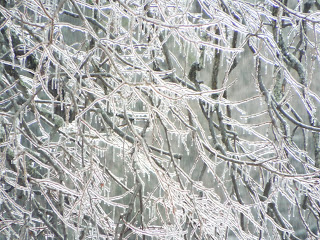 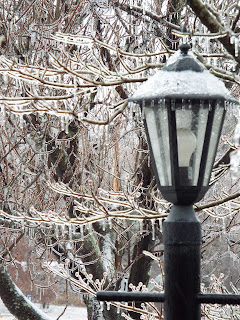 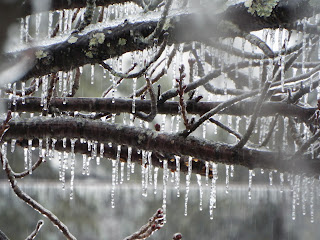 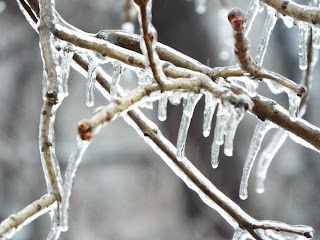 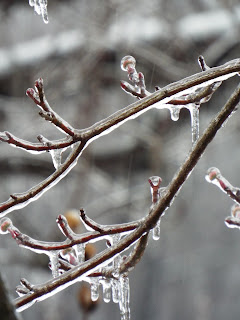 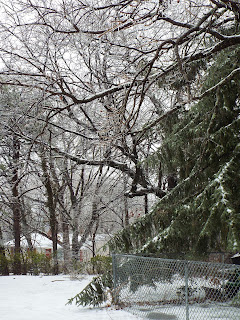 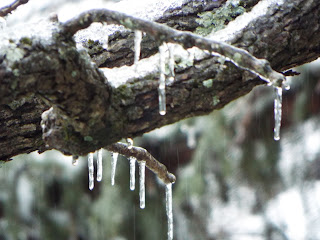 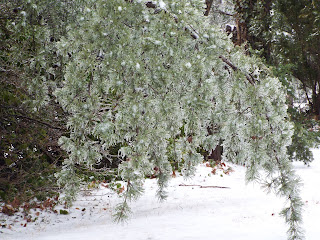 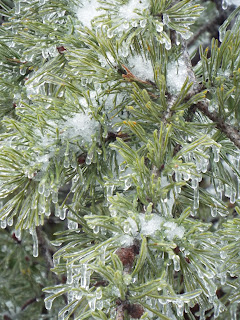 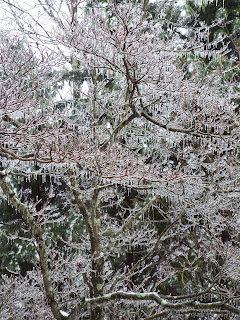 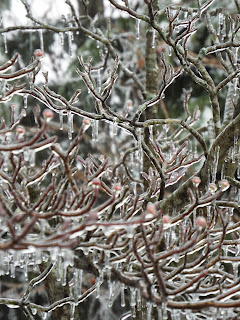 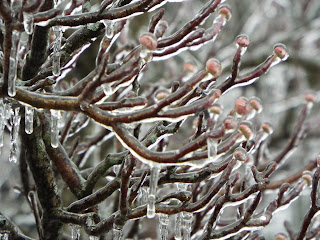 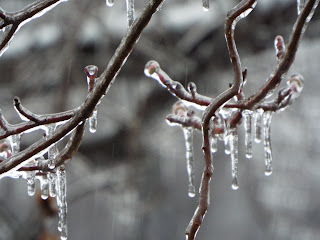 Posted by Elena DeRosa at 2:58 PM No comments: