Last night I witnessed my husband looking down a barrel of a gun while I had a couple pointed at me, in my carport, and not by criminals, but by Roanoke County cops.

It was just your average sweltering Saturday night spent in the cool air conditioning of our home, drinking wine while watching movies. Around 11:30 we turned on Saturday Night Live and after about fifteen minutes of not laughing, we decided to go to bed. As we were getting ready, Bella, our dog, started to freak out...whimpering, running to and fro before jumping into the front window. Once she did that she started barking ferociously, more so after the doorbell rang and a loud pounding ensued.

My husband and I looked at each, "Something's up!" No one we know uses the front door, and no one we know would be out at 11:45pm banging on it. Bella is barking danger, danger, danger! There's been home invasions in the county, one just last week, the perps are still out there. There's no way I'm answering that front door, to be bum-rushed as potential criminals might push their way in. My husband is already heading to the side door, stopping to grab his piece as Bella practically pushes him out of the way so she could "get 'em!"

Adrenaline kicks in and I know I have to be back-up. I've undergone training and know how to use my .38, only shattering water-filled bottles or just missing the bullseye on paper targets. By the time I get to it my husband is already out the door, with me yelling, "wait for me, wait for me, be careful, be careful!" I enter the sunroom, blinded by a light coming from somewhere, as I open door to Bella's yard to let her out. I hear shouting, but it's not coming my husband. I'm not out the door but being yelled at to "Step outside, step outside!" Still, not knowing what is happening I yell back, "Shut that light!"

I'm praying I don't hear a gunshot...I don't want to have shoot anyone, even a criminal who shoots my husband. Whoever it is, they are not lowering the light so I look away from it and see my husband to my left staring down the barrel of a gun while a cop shouts to him to put his hands on his head. WTF? The light gets lowered as I'm being yelled at to step out of the house, and for the first time I see cops, many, many cops all over my yard, guns pointed at me and my husband. I quickly put my piece on the shelf inside and step out to the shouting, "Put your hands on top of your head, hands on the head!" while three of them advance on me, their guns drawn and pointed.

"Do you have a weapon?" "Not on me." Wearing a dress, without a bra, I get frisked and patted down as does my husband, even his privates. He's wearing shorts and a wife-beater t-shit and remarks later, "We were dressed for an episode of cops."

"What the hell is going on?" I ask. "Keep your hands up, hands up!" is the response. Our hands are up and Bella's not liking this one bit, she's barking crazy and banging on the fence, "Let me at 'em, let me at 'em!!!" And I'm thinking, Oh damn, they better not shoot my dog. I'm looking at all the cops in the side yard, front yard, driveway, I count five cop cars. My husband tells me later there were more than that. I still don't know why they're here.

Finally a female cop states, "We got a report you assaulted someone." "What?! We've been home all night. You got the wrong people." They don't want to hear that, "Keep your hands up!!!!" Then it dawns on me. "What address are your looking for?" She says our four house numbers. "Yeah, but what street? This is xxDrive. Are you looking for xxMountain Road? That's two blocks down!" I try to point the way but I'm told to keep my hands up. She looks at her pad then all the cops start looking at each other. Then, only then, do they ask our names. Yeah, wrong names, wrong house.

Like what happens when a light switch is turned on in a hoarder's home, the roaches scatter. They all jump in the cars and head down the road. Not one apology. Not one we're sorry. I yell at them as they leave, "We're the fucking good guys!" I don't even know why I said that. Maybe I said it because I police the park across the street that they're supposed to. I've thrown druggies and pedophiles out of it. Just a couple of days ago we had a run-in with someone there, so it was no stretch of the imagination that maybe, just maybe they were the ones coming to our front door in retribution. When the banging on the door occurred not once was "Open up, it's the police!" uttered. They NEVER identified themselves as cops, not until I was looking at guns pointed to our heads did I realize they were law enforcement.

This could have been a disaster. Had we not complied immediately who the hell knows what the outcome might be. They all seemed quite hopped up, and why in the world would there be so many cars for a report of an assault??? It got me wondering why they were here, and why they thought our house was the place especially since our mailbox clearly states the correct address. It's one thing when the post office continually screws up delivering the right mail to the right address, but this is a whole other ball of wax.

I couldn't see all of the cops faces because I was mainly focused on the ones who had their guns pointed at me and the one who felt me up, but I wonder if this had something to do with another occurrence of a false report that happened two years ago, bringing three cops at my door at midnight then again. Waking me out of a deep sleep to question me and check my and my husband's hands for bruises one of the male cops at that time said, and I quote, "I hear you're a hot-headed crazy Italian, but we do things differently down here." I didn't even know what the fuck that meant. Flabbergasted that they would believe a report from someone who was just released from a mental institution after trying to kill themselves with drugs, I did go down the next day to file a complaint. Since no charges were brought, and no report was even made, nothing happened. But what if one of the cops last night was that same cop and heard the address, not listening to the full address, and immediately thought, that's the hot-headed Italian, follow me, I know exactly who they are and thus arrived at my house??? How screwed up is that???

When my kids were young I always told them cops are your friends. As the years passed and I saw and experienced more and more ineptitude from them, I changed my narrative. Now, it was more, "Be careful of cops. Not all of them are your friends. Some have a power complex. If you're ever stopped, do exactly what they say. Answer yes, sir, yes ma'am. Tell them you're reaching for your license, registration, whatever. There are dirty cops, ones that steal from dead men's homes. There are lazy cops, ones who can't be bothered to investigate crimes. There are judgmental cops, ones who see a teenaged girl with hair dyed a different color than the norm and immediately assume she's walking around a supermarket to shoplift. There are prejudiced cops, ones who think if you're Italian or a New Yorker in a southern state you must be a criminal.

Then there's cops like the ones in New York City who recently thought a bomb was tossed in their vehicle and rather than have it blow up everyone in a crowded area drove post haste to minimize the mayhem as much as possible. It didn't matter that it wasn't a bomb, but that they thought it was. Too bad there seems to be less and less of those types of cops lately...

So, after all this what would I have done differently? Probably the only thing would be the next time I would also reach for my phone and hit record...

Needless to say I sent an email requesting what this means, in particular if Roanoke County Police thinks I made up the story. I am awaiting a reply...

October 24, 2016 follow-up post to the follow-up entitled "Who Polices the Police?"

A couple of shots from last night's sunset in Roanoke... 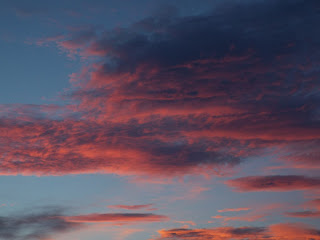 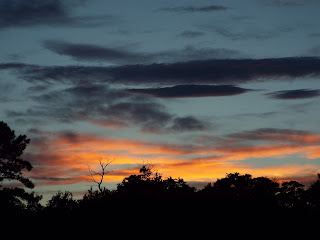 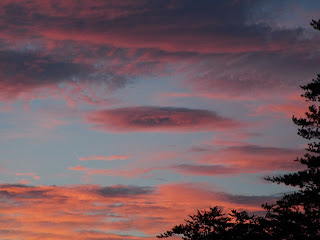 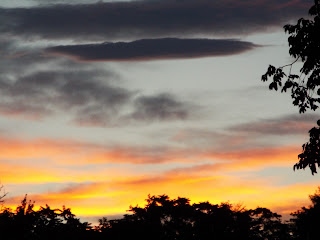 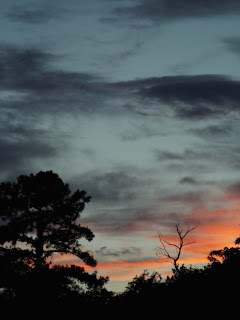 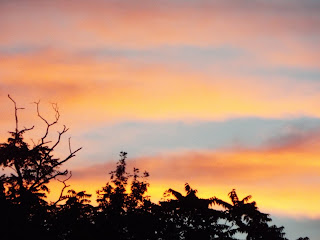 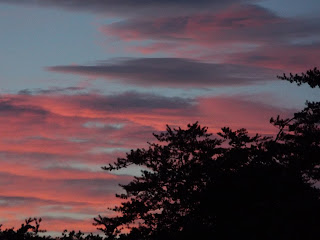 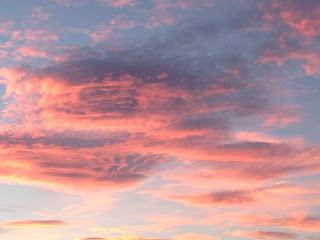 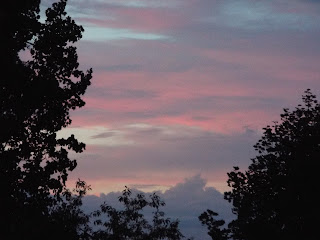 Posted by Elena DeRosa at 9:33 AM No comments: