When Did Hugging Becoming Bad?

Although I do have great respect for the environment, I probably wouldn't be called a tree-hugger, but I am definitely a people-hugger. Much like Europeans greet each other with a peck to each side of the cheek, I don't kiss hello or goodbye, unless you're a relative, but I have been known to hug in greeting and parting. I don't know if it's a New York thing, or just an Italian thing, but it's pretty common amongst "my people."

This past weekend my husband and I attended a Christmas party a friend of his was throwing. I had never met his wife before so upon greeting her I took her extended hand with a "nice to meet you." By the end of the shindig when we were leaving I did give her a hug goodbye. When we were heading out the door I saw her husband who was hugging another guy goodbye and I went up to him to thank him for having us, and hugged him. He jumped back as if I electrocuted him and began apologizing to my husband, "I'm sorry man." My husband was like sorry for what? I guess I overstepped my boundary, but didn't mean anything by it, but now that I know it's verboten in Salem, I won't do it again.

My daughter was brought up the same way and she too is a hugger. She had a hugging experience on Saturday night, which was worse than mine. While she was at Valley View she saw a young man that she has known since kindergarten and hadn't seen in over a year. Her instinct was to hug him hello while saying something to the effect, "XXX, I haven't seen you in so long. How are you?" Well, she barely got that phrase out when she heard from the left of her, "Get your fucking whore hands off of my fucking husband, you fucking slut!" As if that wasn't a shock enough hearing this person shout it out in a crowded mall, seeing it was coming from someone heading towards her who had a small child perched on her hip, was more disturbing. The expletives flew at my daughter who looked at the childhood friend with a, wtf? Her friend tried to calm down his wife but she was having no part of it. My daughter was embarrassed especially since she had never had any type of romantic notions with this guy who was merely a friend.

Rather than confront this trashy individual and put her in her place, my daughter felt bad for the kid who had to hear his sweet mother's venom pour out of her mouth. Since my daughter was half the screamer's size, she had no doubt that the child would have been switched to whatever hip her mother's punching arm was not. Rather than be put in a hospital for being hospitable, my daughter put up her hands, shook her head, and walked away from the diatribe. I told her she did the right thing, "You gotta pick your battles." Her response was, "I didn't want to be a headline." The first thing she did when she got back to work was block her friend from Facebook. "If she acts that way in a public place, she's beyond the "jealous type" and probably got all his passwords.  She sounds like the type to stalk me, and damn, I don't need that shit. I don't want to be a headline."

Don't be a headline...a phrase I need to remember!

Anyway, my question to you readers is...are you a hugger? I don't mean to a total stranger, but if it's someone you know, do you hug? And does it matter if that person is not your gender? It wouldn't bother me one iota if a female friend hugged my husband. Would it bother you? Just because you hug someone it doesn't mean you want to fuck them.  I don't know...I think the world could use a little more hugging, not less. 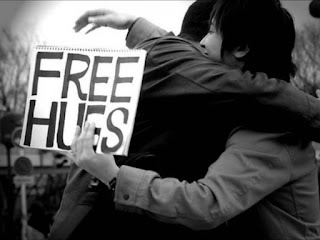