Some of the best vacations I've had have been ones that had little or no planning, ones where I just got in a car armed with road maps, AAA tour books, a suitcase, a cooler, with a sorta destination planned, and hit the road. Last month my husband and I decided to do just that and we found ourselves in upstate New York in the Lake George region.

During the summers of my Brooklyn childhood, going on a vacation to Lake George, or the Catskills, both in upstate New York, was almost a rite of passage. When I was a kid I never went to either place. Instead, my father drove us all around the New York upstate hotspots. Vague memories include Lake Placid, The North Pole, 1,000 Islands, Niagara Falls, sometimes Toronto, Montreal and Quebec,  then back to the New England states. Glad I got to see The Old Man in the Mountain, whose granite profile is no more in New Hampshire, some distant relatives who lived inVermont, old sailing ships in Connecticut, along with other forgotten destinations. When I became older and could travel myself, I did hit some upstate spots for skiing and dude ranches, including the Catskills,  Hunter Mountain, Bear Mountain, and some other mountains, but never got to Lake George. It's probably not on most people's bucket list but it was on mine, (I have a very doable travel bucket list) so off we went...

Driving up there for an extended weekend with no hotel reservations, during August, was probably not the best idea as we met quite a few no vacancy signs. Too many of the establishments that did have a vacancy only had one for that night which would mean we would have to begin the trek all over again the next day, not something I particularly wanted to do. When we first rolled into town the plan was to stay at a really nice place right on the lake. I wanted to be able to open the window in the morning and see the glistening sun beam off the water and fall asleep to the sounds of bullfrogs and crickets while ripples of lake gently lapped to the shore. As doors slammed in our face, some outright laughing at our question, "Why aren't there any vacancies?" and their response, "Ummm, it's summer!" we began to think that maybe it wouldn't be such a bad idea to be across the street from the lake and stay in one of those cute little cottages that dotted the road. When that proved undoable as well, we decided to keep driving north while following the lake to see if there was any rooms available. We had 32 miles of possibilities.

After being met with a plethora of no vacancy signs we found ourselves about ten miles from the downtown happening part of Lake George and in a cute little town called Bolton. There was an old timey looking motel with cabins facing the lake that had a vacancy sign up. 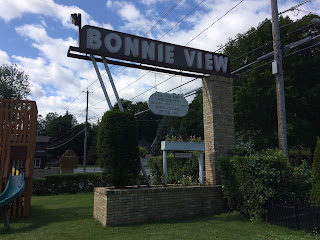 We were thrilled to find that they did indeed have four nights available, alas no lakeside cottages. We were told those were reserved a year in advance in most cases, so we opted for a room right by the pool. We could walk down to the lake and use the kayak and canoes any time we wanted. Oh, that sounds great we said to the clerk, and booked the room at a higher rate than I wanted to pay, as it was a typical upstate motel room that you would expect to find in the seventies.

Even if there was no hair dryer, only one-ply toilet paper, the most translucent, thinnest, wrapped sliver of soap I have ever seen, and no complimentary shampoo and conditioner, I was thrilled it had air conditioning, a refrigerator, cable television, and thick wooden walls with no neighbors on either side. When we settled into the room I mentioned the canoe and kayak to my husband causing us both to burst out laughing as he uncorked the bottle of wine. Yeah, like we would actually go out on the lake, and row, or paddle something. Ha!


In fact, it was quite the hike down to the lake from our poolside room, so I think after the first time trek, that was the last time we trekked. Instead, we drove into town to see what was what, and found there was no shortage of activities for people who were more ummm, "outdoorsy" than us.


Seriously though, we found plenty to do... 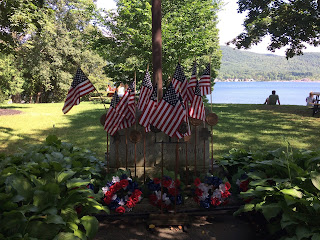 Downtown Lake George is your typical tourist upstate town, very picturesque, plenty of fudge stores, souvenir shops. ice cream parlors, live music, bars, restaurants, shopping, shopping, and more shopping. Bring comfortable walking shoes as you will do a lot of walking. I never realized the Lake George area had such a huge Italian presence. One Italian restaurant in Bolton, Cate's, was so good I thought I was back in Brooklyn. In fact, the pizza we had there was better than any pizza we had the last time we were in Brooklyn.

We overhead a lot of people speaking and many folks had our same Brooklyn accent. When the chef came out and made the rounds, we made sure to tell him how much we enjoyed the meal. I also discovered the refreshing joy of watermelon vodka mixed with cranberry juice and seltzer. There was a typical German restaurant that also had authentic fare, and lots of it. Go hungry. We also found a great Italian deli only down the road from the motel where we had breakfast and lunch. I think the biggest surprise came when we stumbled upon a bakery in the Village of Lake George that not only had real Italian bread and pastries, but the best black and white cookie I have ever had.


The food was so delicious up there, and varied with so many Italian delicacies to choose from which I cannot get in Roanoke, we didn't have to hit Brooklyn on the way back home to Virginia because all my food cravings were satisfied.

Another reason why I chose Lake George...there was another bucket list location nearby. And it was a perfect time to visit as this was the brief season when the thoroughbreds were racing in Saratoga Springs!  More on that in the next blog post...
Posted by Elena DeRosa at 2:42 PM 1 comment: