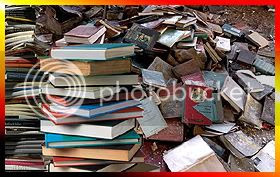 Maybe I've been reading Joe Konrath's blog too much, but after careful consideration I have decided to pass on entering Fractured Facade in the Amazon Breakthrough Novel Award contest. The grand prize is a publishing contract through Penguin Books, as well as a $15,000 advance.

When I first considered possibly entering, I clicked on the icon for more information and immediately received an email from CreateSpace, thanking me for contacting them. CreateSpace is the self-publishing and print on-demand services arm of Amazon. The email listed all the benefits I would receive by self-publishing with them, but there was not one mention of the ABNA contest. I thought, "Aha! This so-called contest is just a scam to get authors to self-publish with them." A quick Google search revealed ABNA is a legitimate contest, but I'm sure the 9,998 entrants who do not win, will forever be spammed with emails from CreateSpace urging them to create a book with them. Pass.

It's not that I feel my book would never stand a chance of winning, and that $15,000 is an amount to sneeze at, but frankly, I'm not interested in a contract with Penguin. Maybe three years ago I would have been salivating to have someone from there even glance at my manuscript, but not any longer.

I love being an independent author. I love being my own agent and my own publisher. I love only answering to myself and my readers. I love that I can set my own deadlines. In fact, I've put my research on hold for the paranormal novel I planned on writing next, so I could focus on a short story that's been yelling at me to write instead. It's an "anti-Valentine" tale that I hope to have up on Amazon before February 14th. There's no way I'd be able to do that had I been "traditionally" published.

If there are any authors who want to enter ABNA you better hurry. The submission period is open now until February 5th, but they're only accepting the first 5,000 entries each in general fiction and young adult. Best of luck to you!
Posted by Elena DeRosa at 10:58 AM