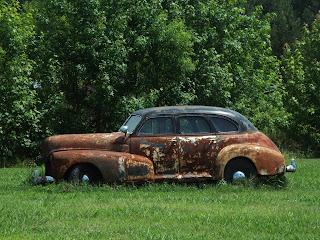 With apologies to all those drivers who came into the shop in December and January to have their vehicles inspected saying, "this will be the last time I have to do this!" I am sorry to inform you that HB130 and SB125 which would have eliminated state inspections in Virginia did not pass. I am happy to inform the citizens of Virginia, and all drivers who drive through Virginia, that HB130 and SB125 did not pass.

In 2018 20% of vehicles inspected in Virginia failed, that's one in five vehicles. Out of the 8.2 million inspected, 1.6 million had critical defects, 725,000 of that number were faulty brakes. By the time your foot goes all the way to the floor while pressing that brake it's too late. Your brakes have failed. When your brakes are going bad not everyone can "feel" it or "know" it. I am driving a 2015 vehicle and until my car was on the lift for an inspection I had no idea I needed brakes. I can guarantee you the mechanic (my husband) was not trying to "rip me off," but was performing the duties his inspection training mandated to keep the vehicle, passengers, and others safe. I can guarantee you he takes the same pride and effort for every vehicle's safety that he inspects as he does for his family and friends. After all, we are all on the same roads.

When I first heard the bragging from the Delegate who introduced the bill claiming it was bipartisan and it was about time Virginians were able to keep more money in their pocket by eliminating yearly inspections, it made me scratch my head. Did he seriously think $20.00 per year would greatly improve anyone's quality of life? Is saving that $20.00 on inspections way less than what Virginians are now going to be spending in the added gasoline taxes that they will be paying not once a year, but every single time they fill up their vehicle? I seriously doubt it.

Some folks said it shouldn't be up to the state to dictate to its citizens when they should get their vehicle inspected as we could keep our vehicles safe without having to pay $20.00! Other states don't have it, why should we? Well, let me tell you a story of what happened yesterday and is really the reason why I am writing this blogpost today.

Someone, let's call her "Jane", rolled into the shop yesterday for an inspection. The first thing Jane said of her 1993 vehicle was, "there's nothing wrong with it." Usually when someone says that, there's usually something wrong with it. Another sign that there might be something wrong is if the vehicle is used as a garbage can and ashtray. You see, that shows the occupant doesn't take "care" of the inside of the car, so there's a good chance they don't maintain the rest of the car either. No judging, just protecting, so a thorough inspection is done. Sorry Jane but your brake lights are out. "No they work." I'll show you, they're out. "Oh open the trunk and jiggle that wire." So Jane does and after a while the lights flicker on and then off. "See, I told you." Sorry, Jane the brake lights are not working. That's a hazard for you and others. "Well my boyfriend will fix it." Ok, that's fine. "So you're going to pass me, right?" No. "But he really is going to fix it." That's fine. Have him fix it, and if you come back within 15 days, the vehicle will be reinspected and if there's no problem you will get an inspection sticker. "Why should I have to pay for another inspection?" If you come back within 15 days you won't have to. Jane left with a rejection sticker and hopefully she will get those brake lights fixed before someone crashes into the back of her.

You see, just because a shop spent all that money on getting the proper equipment and hires trained mechanics who undergo testing to become an inspection station, if the vehicle fails, the shop does not have to be the one to fix the problems. You can bring it anywhere and get it fixed and if you don't want to pay for another inspection, as long as it truly is fixed and within 15 days from the rejection, you get your sticker. Now less you think shops are really racking up the funds, you should know for vehicles it's $.70, and for motorcycles is $2.00, of that $20.00 fee (which was $16.00 until last July) goes to the Dept. of State Police.

So how do the State Police feel about losing the inspection program? They are totally against it. And it's not just for the safety issue. The State Police also have an aviation unit. Guess who came up with the funds to replace the helicopter that crashed outside Charlottesville in 2017? The State Police. Not only are the helicopters used at the pleasure of the Governor to fly him here and there, but they are used to perform medical and search and rescue missions. I have a feeling the Governor did not realize that if he eliminates the income for safety inspections, he's hurting the State Police, oh, and himself.

Let's forget about the money for a second. Let's talk safety. Do you really believe that a person jumping up and down for joy because they will be saving $20.00 to have someone give a thorough going over on their vehicle is going to spend money maintaining that vehicle every year? Or, is it more likely that they will wait for that vehicle to break down before getting it looked at? They probably don't realize it actually costs more to repair a vehicle than to prevent a problem from happening. Fixing those brakes before they fail will cost a lot less than crashing into someone when they fail, and I'm not talking just money. Or maybe during a torrential rainstorm that you've just run into on the highway, you realize those wipers are shot to shit and you can't see a darn thing and crash. Could have been easily prevented.

You know who else would not benefit from eliminating yearly inspections? Consumers who buy vehicles from used car lots. At least now they are offered some protection if there is a current sticker on a vehicle they're thinking of buying. I still believe you should take the vehicle you're thinking of purchasing to a mechanic to look over before doing so, like many of our customers do, but a lot of people don't. Some used car dealers are less than, ummmm, honest shall we say, in reporting what the vehicle has been through and many people don't know what to look for. Free tip...kicking the tires will not tell you anything. It's unfortunate that we see too many people who have been taken advantage of after the fact, such as many immigrants who don't speak English well. They don't understand and are probably intimidated to seek any recourse when they are sold a lemon. I can only imagine how much worse it would be if the vehicle didn't have to undergo an inspection before being sold.

We've had jalopies come in held together by spit and duct tape, plastic bags serving as windows, cracked windshields about to fall out, red magic marker covering a rear light bulb, worn out tires with barely any treads, and many other head-scratching conditions that people think are ok to drive around with. They're not. Not everyone "gets it" and I don't want to meet those folks on the road, while driving with them, next to them, bicycling near them, and walking where they drive. So yeah, I'm thrilled Virginia is keeping its state inspections, and you should be too.

Posted by Elena DeRosa at 12:47 PM No comments: