When I handed my son an envelope he asked, "What's this?" "Open it." He read the outside of the "Congratulations, I'm so proud" card and when he looked inside, read my personal note, and saw the bulk of dollars he said, "Mom, you don't have to do this." "It's not my money, it's yours." As he raised an eyebrow I explained, "Remember when you were young and Grandpa would hand you money, or you got gifts for your birthday, Christmas, whatever and you would ask me to hold it...well I did. I put it in a special envelope with your name on it, and always planned to give it to you when the time was right. Well, now that you're moving to Raleigh, the time is right. Just spend it wisely." And with that, the boy burst into tears. And with that, I burst into tears. We hugged each other tightly and cried on each other's shoulders.

My little boy is no longer a little boy. He's a 22 year old grown man and has moved to another state to better himself. There were no opportunities here in Roanoke to have a bright future, and although it has broken my heart, I supported his decision. He was made an offer he couldn't refuse for a position that normally requires a bachelors degree and five years experience. He might not have either, but his boss realized he does have the smarts (paper unnecessary) and a good work ethic (three alarms clocks are necessary) whereby he would be a great asset to the newly formed analyst team. Although I hate that his company chose to move to Raleigh, I am thankful for the relocation package, salary, and promising future they are providing in a technical computer position where my son's interest lies. I've always drilled into my kids' heads if they work at a job they like, it will never feel like work, and that's when they'll be most happy. His girlfriend is joining him so they can lean on each other during this major transition. I hope they will be happy. 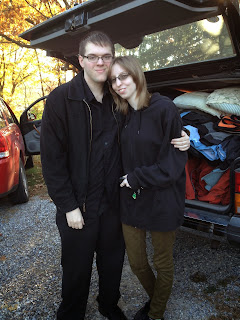 And yes, I cried and cried. If my son was a piece of shit I probably would have been happy he left, but he's not. He truly is one of the most kindest and compassionate souls I've ever met, and I say that not just because I'm his mother. I'll never forget when he was in elementary school and was playing in the fields with other kids. There was a pitiful cry and when the children went to see what it was they discovered a bunny tangled in a temporary plastic fence. While other kids laughed and threw rocks at the poor creature, my son ran to the bunny and released him. He was always that way, always a good soul. He never drank, smoked, or did drugs. He was always a leader, not a follower. I hope he always stays that way. I wish his grandfather was here to witness how he turned out. Grandpa always said he was special.

I'll try not to cry any more. I am happy for his success. I have to let go. I am grateful that he's only three hours away and not stationed in a foreign land, or, tragically gone forever. I am fortunate we have a wonderful relationship and I pray we continue to. Most importantly I pray for his safety and well-being. Please Mother Mary, keep a watchful eye over him...


"Good habits formed at youth make all the difference." - Aristotle

Ain't that the truth!
Posted by Elena DeRosa at 10:41 AM No comments:

If you live in Brooklyn, especially in the Bensonhurst/Bay Ridge sections, you've probably visited the Gingerbread House more than once. 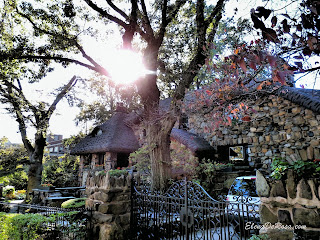 It looks like a home taken straight out of a fairy tale and plopped down in the southern tip of Brooklyn. 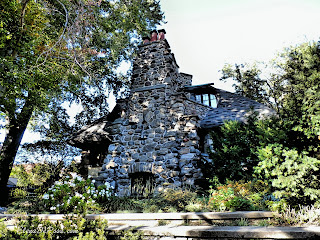 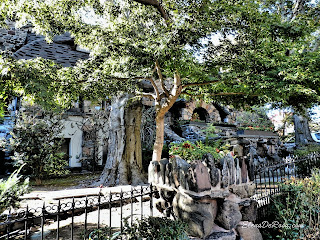 Built in 1917, this house is on the market for a mere $10.5 million. I wish I had that type of dough because I would buy it in a heartbeat. To see more pics and the inside, click here. It's a beautiful neighborhood to live in with the shore a mere block away.

For Halloween the house across the street has decorated, and based on their warped tastes I wouldn't mind having them as neighbors... 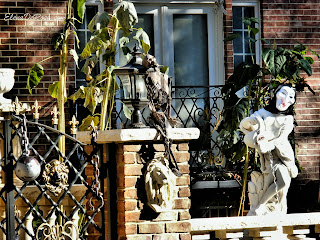 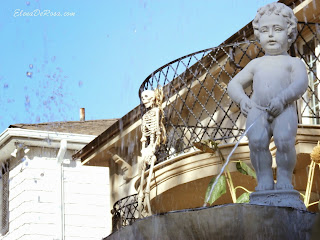 After taking a couple of shots we jumped on the Belt Parkway and headed to Brighton Beach, passing under my second favorite bridge...the Verrazano. 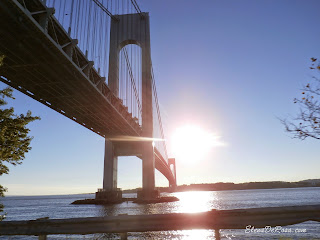 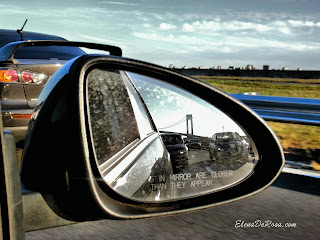 When I get a chance I'll post the Brighton Beach pics...bye bye Bridge!

This was the first time I actually got out of a car (found a spot!) and was able to visit Brooklyn Bridge Park located near downtown. All I can say is...wow...what a change from 20 years ago... 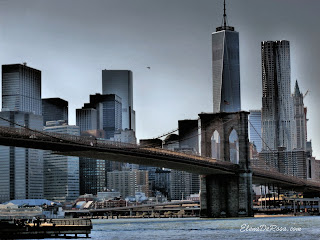 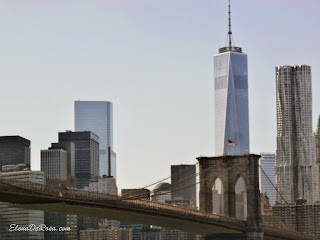 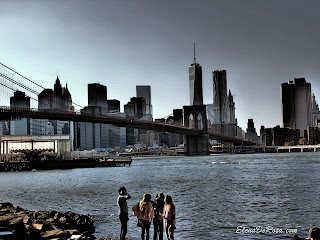 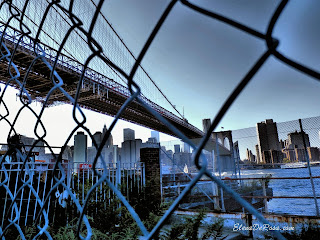 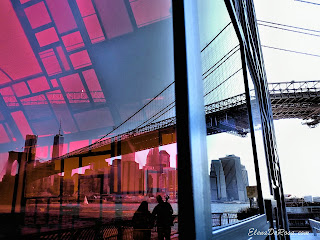 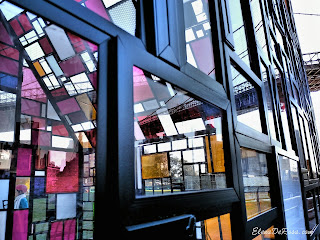 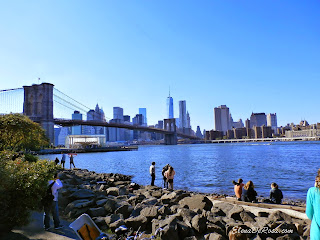 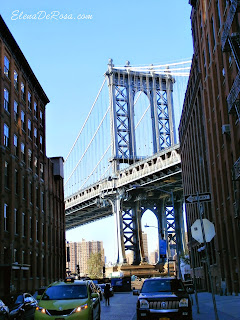 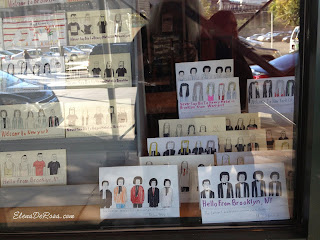 During Sunday's drive around town my friend and I stumbled upon a wedding being held at Regina Pacis church. This is where my mother's funeral mass was held. 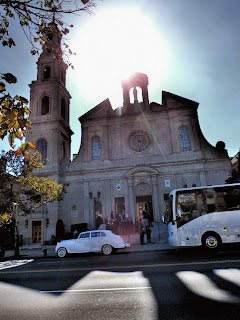 Off to the side of the church is a small basilica honoring Mary where pregnant mothers go to pray for their unborn child. I knelt before her statue during both of my pregnancies and every time I go to Regina Pacis I stop in to say a prayer of thanks. Although I never have, mothers leave photos, notes, and mementos of their children after they are born. 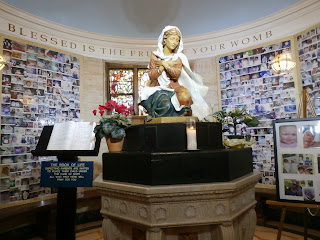 What follows are pictures of what you can expect if you attend a typical Italian wedding in Brooklyn...they're a little different than the ones I've experienced in Southwest Virginia.


I bet this was one wild wedding.
Posted by Elena DeRosa at 5:01 PM 1 comment:

Today is the first day of my writer's retreat. I'm not in a cabin in the woods, but in my bedroom/office in Brooklyn. We arrived on Thursday and for the next two days we went to work to not only make the house more comfortable, but also more functional. While I concentrated on cleaning, my husband bid the heavy work which included hanging a clothes line, assembling a bistro, and building my desk. He did a wonderful job so at the end of each day he was rewarded with a meal at the restaurant of his choosing.

The first night we went down the corner to the Italian joint so he could have his baked clams and Veal Rollatine, both of which were excellent. The next day he chose to go to his favorite roast beef joint, Brennan & Carr's. Wow, what a disappointment. We couldn't put our finger on why the sandwich tasted so lousy until we realized they have done away with the cheddar cheese melt and instead put a slice of American cheese! WTF?! The french fries were barely cooked, cold and again the renown cheddar cheese was missing. Not only was the quality lacking, but they raised the prices. Makes no sense especially since they were recently highlighted on the Food Channel or Travel Network. Why screw with a good thing? The last night he was to be in town we went to Joe's Foccaceria of Avenue U. I had heard hubbub that it wasn't the same since the owner married a Russian woman. I had a craving for the Sicilian meatloaf that I love, love, love. Not any more! It came with brown gravy! That's not Sicilian!!! Totally different, and not in a good way. Our friends had the stuffed artichokes which they said were bland not the same. We also had an order of stuffed mushrooms...bland and cold. No "wise guys" were hanging around and now I know why. One thing Italian men know is good Sicilian food and I'm sad to say it could not be found here. Sniff. Sniff.

Everything changes, and sometimes it's not for the good. One of my missions while I'm on my sabbatical will be to find us new joints to eat at. Of course the main mission is to at least get the first draft down on my Virginia story. I wrote the New York story in Virginia and now I seek to write the Virginia story in New York. It's not the "haunted" one, but another precautionary, modern tale which centers around the same family in my first book, Fractured Facade. Although this tale will not be about ghosts, I have to tell you since I've been in the house by myself I have heard my name called once -- it sounded like my dad -- and keep experiencing knocks on the wall, dresser, etc. Perhaps I may have yet another tale to tell by the time I leave here.

Anyway, I can't thank my husband enough for not only agreeing to my request to flee Roanoke, or to drive me here, or to complete everything on my honey-do list in two days, or to be at the ready if I decide I need to come home quickly, but for also holding down the house, business, family, and puppy in Virginia. I am so freaking lucky to have met a prince like him after a lifetime of kissing frogs, and I hope my efforts won't be in vain and that I will actually write something that will sell so I could help him out for a change.

This is my new "office." 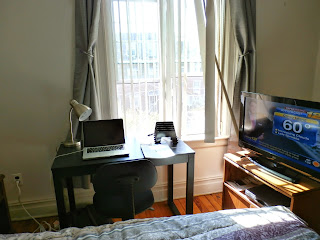 As you can see my desk is nowhere near as grand as the one in Roanoke, but I'm hoping this change of environment will be what I needed to light that spark again. Too bad I have to wait for the cable company (they all suck, don't they?) to come so I can't get into my zone...yet. Maybe I'll create a photo blog of my Brooklyn tour from yesterday.
Posted by Elena DeRosa at 2:23 PM No comments: