At least someone in this house enjoyed the recent snow blast. You can see by the chunks of ice stuck on her face, Bella has been digging for rocks. If it was up to her she'd stay out there all day until she was one matted mess. I let her defrost, then return outdoors for her leaping, burying pleasures. I have given up wiping puppy prints all over the house and figure the floors won't be clean until spring. 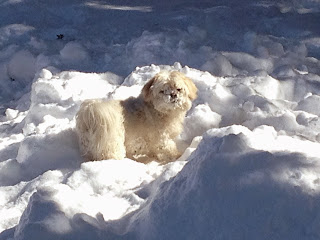 There was someone else in the house who, in the beginning, welcomed the snow...my husband. You see, for the last couple of weeks his toy has been waiting under the blue tarp on the back of that trailer. Just waiting patiently to be called to action. 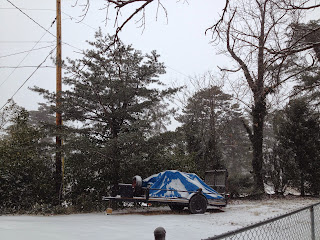 Before it wound up here, it has spent many months at the shop getting ready for its debut. Countless hours, and countless dollars, have been spent modifying the John Deere mower into a powerful snow shoveling machine. When he first received the mower he forgot about an old Italian prophecy -- inherit a dead man's vehicle and it becomes your money pit. It doesn't matter if you inherit it, or buy it, it's still the same money drain. And he should have remembered that for all the time and money we've spent on the phantom problems of my dad's Olds.

When he first took the John Deere off of a friend's hands, he told me it only needed to be tuned up and spruced up as it sat still for so long. Otherwise, it's fine. Rather than detail every dollar, I'll just say parts could only be ordered through John Deere (even the parts list and manual had to be bought), and a welder even got involved helping my husband's dream to become a reality. Ka-ching! Ka-ching! Ka-ching!!!

Every time I rolled my eyes, I was assured this was going to work. By the way, for all the money he's spent he probably could have bought a new plow,  a couple of snow blowers, or, hired a local snow shoveling team to be on call all winter. But I digress. It was finally snowing! 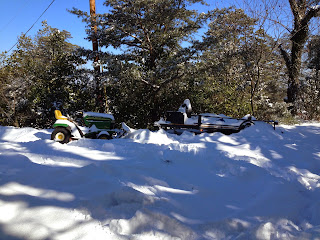 My husband came home earlier than usual, stopping at Food Lion to stock up on provisions, two bottles of wine and treats for Bella. He almost made it to the door before he slipped on the ice, tumbled to the ground, shattering the wine bottles. 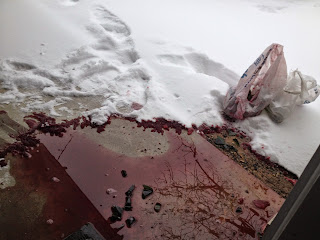 Luckily he wasn't hurt, but he was pissed, and now, soaking wet. Good thing he wouldn't be spending hours out there shoveling snow by hand in wet clothes!

The night before, he had tried firing up the toy, just in case, and discovered it was dead. Imagine that. So before using it, he had to hook it up to a portable battery. As it charged, the snow fell steadily. A big smile spread across his face when it kicked on, and he gave me two thumbs up. I was cooking dinner and asked him if he would be long. He said to continue cooking, he'd be 10-15 minutes. Bing, bang, boom.

I could hear the noise outside as I hovered over the warm stove. A half-hour later I went outside to tell him dinner was ready, and lo and behold, nothing was plowed! Bing, bang, boom. In fact, he never got to try the plow as the toy would not drive in the snow. Huh? Rocking back and forth, spinning wheels, smoke spewing, noise of a thousand blowers, there he sat, going nowhere, on a lawn mower with a snow blade on it. 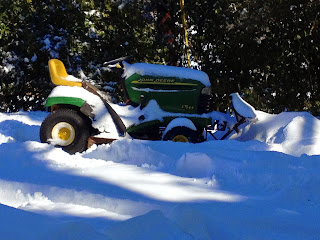 When I saw the back wheels spinning, I suggested he use the portable plastic road strips I had bought him and my son for Christmas. They laughed when they saw them, but I told them both they would thank me when they were stuck in the snow. Unfortunately, my husband's  practical gift was at the shop in the back of the mini van. So much for them. He was determined to make this toy work and even began shoveling a path for the toy to drive through. Ummm, doesn't that defeat the purpose of not having to shovel? 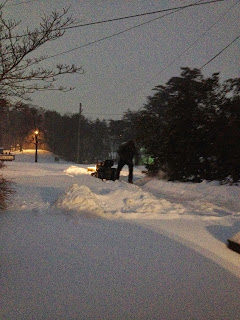 I couldn't watch any more so I went inside and had dinner by myself. Men can be so stubborn. They don't need to look at directions when putting something together, and would rather drive around endlessly before asking for directions because they are lost. They think with perseverance it will all work out, eventually. He finally gave up an hour later when he got stuck in the middle of the road and had to push the toy back up the driveway. By the time he was finished, he successfully blocked the driveway so that it was impossible to exit now. Even VDOT leaves a smaller pile.

He had as much snow on him as there was in the driveway when he came in. He was more upset he didn't have the bottles of wine than he was about the snow mowing machine. After changing into dry clothes, getting warm, and having a hot meal he said that was enough and he'd figure something out tomorrow. When I went to let Bella out I noticed he had left the shed doors wide open so he had to get dressed again, go back out there, trudge through the snow, and close them.

Today was a new day, the snow had stopped falling, and he was determined to clear our driveway so he could get back to work. All it took was one phone call and a reinforcement arrived. 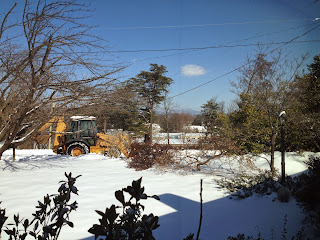 I thought it was overkill, but hey, what do I know... 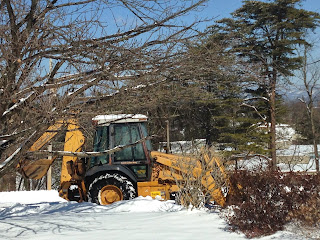 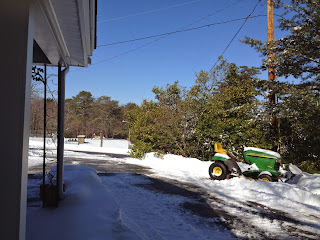 Now, who wants to bet me this very expensive toy doesn't even cut grass in the spring...

Posted by Elena DeRosa at 1:53 PM No comments:

The Valentine's Day Curse is Free

Just a quick post to let you know that my short story, The Valentine's Day Curse will be free on Amazon in all its stores from 2/11 through 2/15. 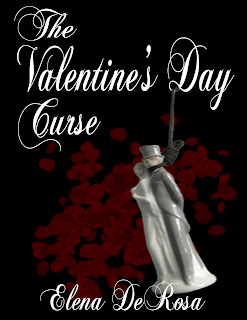 "When Lisa’s Valentine’s Day ritual is interrupted by a phone call, she is surprised it’s from someone she hadn’t heard from in many years. What could her ex, Joey, possibly want from her on what could have been their 25th wedding anniversary?

I hope you enjoy this tale with a twist and that all your Valentine's Days are better than Joey's!

Just click on your country below for a direct link. Thanks for your support, and any reviews and/or recommendations to friends are always greatly appreciated!

Posted by Elena DeRosa at 10:45 AM No comments:

Seagulls in the Roanoke River

70 degrees in February? Now that I can live with! It was so beautiful in Roanoke yesterday I dragged my husband for a walk along the Roanoke River greenway in Salem. On the first leg of the walk we saw quite a few fishermen. None of them had caught anything but all of them said they had gotten nibbles. 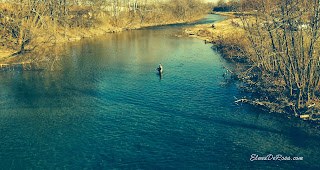 On the second leg of the walk, across Lee Highway, I heard strange sounds that reminded me of Coney Island. It was the call of seagulls. Yes, seagulls in the river! 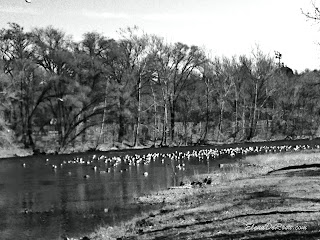 The first time I saw seagulls down here was about five years ago. There were about a dozen or so in a large puddle of water in the Lowe's parking lot on Main Street in Salem. I was quite shocked as I only knew seagulls to be near the sea, not in a puddle in a parking lot.

Apparently, some of the gulls found Spring Lake in Salem which is right across from the Lowe's. I also thought that was odd, but knowing how Brooklyn seagulls are...lazy, conniving, would rather eat a French fry than dive for fish...I wasn't surprised they were making a home there as the lake is right across the street from a Burger King. Geese and ducks already knew that's where they got a free meal so they took over the park, and made a mess of it with their droppings.

Yesterday, I was astonished at the number of gulls in the Roanoke river until I saw what was going on. 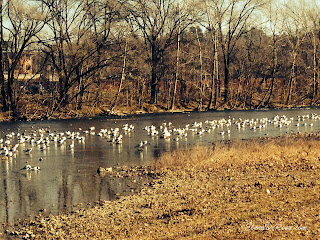 There were some people with a loaf of bread feeding the seagulls. There were so many of them that they pretty much took over the river, and in fact, were threatening any ducks that would go near the free food. When the family ran out of bread, the little ones took to throwing rocks at the birds instead. That will not deter a seagull. Knowing how Brooklyn seagulls are, rats of the sea with wings, I wouldn't be surprised if they take this river over. 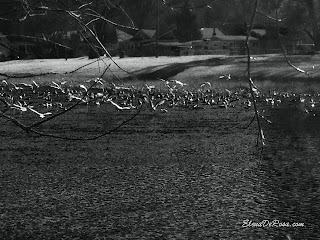 The photos above were taken with my iPhone. I plan to go back with my camera some time, and although my husband says no, I bet the seagulls will still be in the Roanoke River.
Posted by Elena DeRosa at 8:54 AM 4 comments: