I went to Atlantic City and all I got was this cool Tommy James shirt... 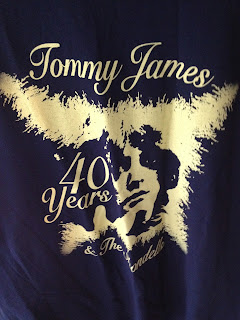 Actually, that's not all I came home with...I also have a couple of lousy shots of him but, more importantly, wonderful memories from a great show. 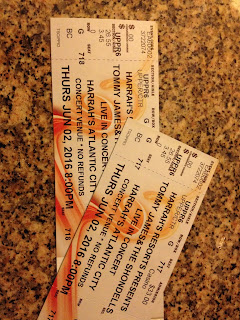 Last week I was fortunate enough to attend a concert at Harrah's in Atlantic City to see the amazing Tommy James and the Shondells. This was the first time I had ever seen the legendary act, one of my favorite bands who shaped my musical tastes as I listened to them on AM radio during my pre-teen years. I remember digging through the sofa cushions amongst the lint in the cracks of the pillows to find enough change to go and buy Crimson & Clover. I think I wore that 45 rpm disc out playing it over and over, and even mastered the quick press of the throat technique to mimic the latter chorus as Tommy sang "Crimson and clover over and over...crimson and clover over and over..."

All the aggravation of having to endure the poor planning of Harrah's regarding the issuing of tickets, resulting in waiting on a long line to pick them up (more on that, and observations on Atlantic City in general in an upcoming post) dissipated as soon as the band walked on stage and the first note was played. TJ played all his hits and I danced in my seat non-stop to such classics as "Hanky Panky," "Sweet Cherry Wine," "Dragging the Line," "Crystal Blue Persuasion," "Mony Mony," (yes, that's his song not Billy Idol's) and others. 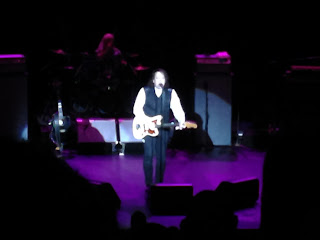 One of my favorites was "I Think We're Alone Now." Tommy told us that it was going to be the music on the closing credits of an upcoming film based on his book "Me, the Mob, and Music: One Helluva Ride with Tommy James and the Shondells." The book was great and that's one movie I am really looking forward to. The song was played at a slower tempo than the original and moved me to tears...such simple lyrics that evoke such a strong response. My hand always beats on my heart in tandem with the sound of the beating drum after that last line in the stanzas below...a TJ fan knows what I'm talking about.

As an added bonus we got to hear the original in all its glory during the encore. TJ did not disappoint. He still got it, his voice was strong, his fingers nimble on the guitar strings. The band was tight and the concert venue was the perfect place to see them. There was not a bad seat in the house. Tommy seemed very happy to be there, connecting with the audience on many levels..."I used to drop acid, now I drop antacid" garnered a good laugh from the understanding crowd of baby boomers. I was particularly impressed by him during the musical stretch in "Mony Mony." He jumped right into the audience, shaking hands, getting hugs, and *gasp* posing for selfies! When's the last time you saw a performer do that during their show? Class act.

After the show he agreed to sign anything we wanted, hopefully something bought from the merchandise table. We were told he even said he would have no problem posing for pics but it had to be a smooth, quick session as he had a fight to catch. I bought the shirt and was preparing to get to the back of yet another long line when my husband reminded me if I got the shirt signed I wouldn't wear it. I want to wear this shirt, and I really didn't want to wait on line, so I passed up meeting him in person. Of course, I'm kicking myself now. 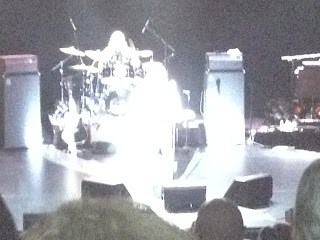 Tommy James and the Shondells, please come to Roanoke, Virginia. We've got a great amphitheater that would be a perfect fit. The sound system & acoustics are great, the venue comfortable, holds a nice crowd number, and, I can also get much better shots. I'd be happy to show you around the valley.

One thing that really bothers me is that these guys are NOT in the Rock 'N Roll Hall of Fame! What's up with that????

If you want to know more about TJ click here for his website. With music so easily gotten for free on the internet, musicians these days really need to tour and sell merchandise to make money, so make sure to check out the store to see some really neat and affordable mercy.

Tommy James...You still got it, baby!
Posted by Elena DeRosa at 1:26 PM No comments: