With her misplaced anger, inexplicable attitude, and trash bags of possessions she pulled behind her when the girl suddenly decided to abandon this household, I secretly hoped she also took our spirits with her.

I don’t know if it was the black black-out curtains, or the hostile mood lingering in the room, but I felt it was necessary for me to do a cleansing of sorts - not just of the damaged wooden floors - but of the atmosphere as well before I moved in there. I spoke with a friend of mine who reiterated my belief that using sage was probably not the best idea. We both were in agreement that when we had smudged in the past things didn’t clear up, and in fact, became even more active. Instead, she recommended I use some bay leaves, turquoise, and kosher salt.

I happened to stumble upon these really cute speech bubble shaped serving dishes when I was in TJ Maxx slashed to $2.00 which were the perfect size. I went to AC Moore thinking I could get some turquoise there but all their “turquoise” came from China and in fact were made of glass or ceramics, not stones. Luckily Crystal Cottage was open and he had one small vial of real turquoise that I found hidden. He didn’t even know he had it. What are those odds? Again for $2.00! Kosher salt was easy to find as well.

So when I got home yesterday I filled five of the dishes with this concoction and placed them in some rooms while saying my own prayers. 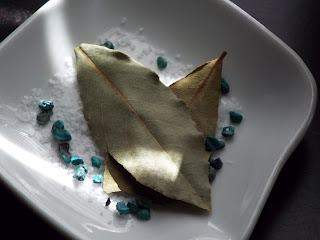 All seemed well and then after dinner things started getting a little weird. As we were watching television in the living room we heard a strange sound, like a “clinking” that my husband thought came from the kitchen and I though came from the piano. Bella also heard it and barked, looking towards the dining room where the piano is. Her head was moving back and forth as if she was following something.  I didn’t see anything. My husband checked the kitchen and couldn’t find anything so I went over to the piano where I had placed one of the serving dishes. When I first placed it down there was salt on the bottom, the leaves placed on top, and the turquoise stones placed all around the leaves. When I looked down I saw many of the stones were now on top of the leaves. I picked up a couple of stones and dropped them on the dish and that sounded like the noise we had heard. I took them back off the leaves and shrugged my shoulders.

From that point on Bella began acting very skittish. When we went to bed she snuggled between us at the head of the bed rather than near our feet where she usually lay, as she loves the fan in her face. She would not settle down and kept panting and following “nothing” in the air. My husband fell asleep, I watched It’s Always Sunny and then shut off the television. A couple of minutes after as I was trying to fall asleep it sounded like a kitchen cabinet door opened. It was loud enough that my husband woke up and asked me if I heard that. As I said yes there was another sound causing Bella to bark and Frank to leap out of bed. He turned the kitchen light on and found an empty seltzer bottle had “fallen” from the middle of the kitchen table to under it.

As he informed me what it was, the lights in the house starting blinking, the fan cutting on and off. “What the hell?!” we both exclaimed. And then complete silence. Everything went out. No power at all. Not knowing if it was just our house or others as well I called the power company and let them know, but since they did not say there was a power outage in my area we grabbed protection before opening the door to see what the rest of the neighborhood looked like.

We had no idea it was raining so maybe that played in the blackout, but the stores down below seemed to still have power. When he ventured to the end of the driveway it did look very dark and there were no streetlights so we breathed a sigh of relief that it wasn’t just our home. Imagination could make you think all sorts of weird things!

We tried going back to bed but I was having a hard time as total silence is too distracting for me to fall asleep. I needed that fan or at least the soft glow of the vaporizer. Lying there I kept hearing knocks and other strange bumps in the night. I didn’t want to wake Frank back up because he had just come from the doctor earlier who told him he has a heart condition, extremely high blood pressure, and needed to not be so stressed out, to get plenty of rest, etc., and besides prescribing nitro glycerine pills and an aspirin a day regiment, he is setting up a bunch of testing with a cardiologist. It’s been a couple of “stressful” weeks here so I did not want to disturb him.

I turned on my side and began praying and imagining a white light covering us, protecting us. The next thing I know is I hear in my left ear a sound that I cannot describe other than to say it was almost celestial, or harmonic, or fluttering, a universal vibration type noise. Like something I imagine one would hear in space. It freaked me out a bit. I tried to move my arm to put the cover my ear and that’s when I realized I was paralyzed, and then I felt as if my body was about to rise, like it was going to go somewhere, not of this world.

I tried to move my mouth but I couldn’t. I tried to speak but nothing came out. I felt myself rising and I pushed myself down. I was afraid to go into the tunnel so I kept fighting it. With all my strength I tried rocking myself free but nothing worked. I started praying in my mind stronger and as I did my silent scream started to be a soft whimper. I couldn’t mouth any words other than a weak help which came out like “heh.” My husband heard it and when he put his hand on me and asked, “Are you all right?” I was able to move again. He broke the spell.

I told him what I had felt, and asked if he had heard the sound that I had, but he hadn’t. I told him that I was paralyzed and I didn’t know if I was going to be abducted by aliens, or if I had unintentionally meditated to a place where I was going to be shown other dimensions. The phrase "harmonic convergence" kept coming into me. The last time this had happened to me was when I lived in Brooklyn. At that time I was by myself in bed and although I couldn’t move I was able to see, and sitting at the edge of my bed was a figure of a man dressed all in black like from late 1800's to early 1900's wearing a top hat. To break that spell I had to gather enough strength to rock myself off the bed. When I hit the floor I was able to move and the dark man disappeared.

I don’t know what I felt last night but damn, I think I stirred up some shit again.

Has this ever happened to you? Have you ever experienced sleep paralyzation? What do you do to get out of it?