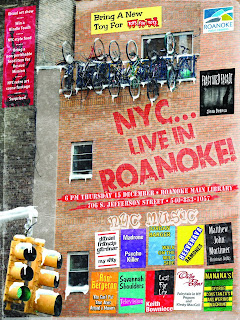 Yup, tomorrow night's celebration of independent aritists, and the release of my eBook Fractured Facade, is almost upon us, and the music line-up is amazing. I am so psyched to hear the following renditions...

Maybe instead of NYC...Live in Roanoke!, we should have called this event Roanoke's Punkapalooza!

The only artwork I've seen thus far (besides my photos) is Sam Hensley's "Empire State Building" constructed of VHS tapes, and it's something to behold. Looking forward to seeing other artists' work as well.

Just a couple of changes from what was reported in Mike Allen's Roanoke Times column -- Didn't have time to shoot the skit, there's only 9 bands, and you will be making your own egg creams.

***UPDATE*** - No, you will not be making egg creams, after all. Concerns were expressed, so ice cream from Maggie Moo's is replacing the NYC iconic beverage. That's cool...pizza is from NYC, and Maggie's is from Roanoke...yet, another bridge between the book's settings of Roanoke and New York.

I hope you come out and support Roanoke's independent (insert creative media here) scene. And please do not forget to support our community by bringing a Toy for a Tot and a non-perishable item for the Rescue Mission.

Too bad the band that was going to perform Fairytale of New York cannot do it...