Well, our, I mean my daughter's, hopes for a full scholarship to Roanoke College were dashed when nestled amongst the Christmas cards was a Congratulations! letter informing the girl she had been awarded an additional $2,000. The professor who interviewed her wrote in his remarks that she was "a good person." I thought that was an odd thing to write. How would he know that after a five minute interview and her sitting quietly in his class? I snickered at that statement, she snickered at the amount. Then the girl rolled the letter into a telescope, held it to her eye, looked through it and said, "There goes Roanoke College...bye bye!"

Although the total award she would receive would amount to $20,000 per year, that is not nearly enough. That's less than half of what she would need. Writing those last two sentences hurt. Sorry, but no college is worth paying that amount of money per year. And one where her original broadcast, communications and/or graphic design major would have had to be replaced by history, it's doubly not worth it. Yeah, she's a history buff, and wanted to learn Italian, but what employment opportunities, besides teaching, which she's not interested in, would a $100,000+ degree in those two fields offer, and, be worth? Can you imagine paying full tuition for that? Well, I can't.

I would rather the girl attend Virginia Western for web & graphic design than saddle her with enormous student loans for a history degree. I would prefer spending my hard earned money setting her up in her own media business. I've seen her work, she's totally capable, and with more real-life experience, and not just a piece of paper telling the world she's "smart" can dominate the field. You might need that degree to get your foot in the door, but once you're in, it's not as important as excelling in your field. Heck, I never needed a degree, and I've accomplished more in my life than most people I know with degrees. But, I hear nowadays things are different, and we all want what's best for our children, so I won't stand in her way.

But, I think my plan is a better plan for her future. I've offered to buy her a Mac along with all the programs she'll need. It's expensive, but I feel it's a good investment in her, and a good opportunity for her. It's up to her to make it work. Meanwhile, with all the credits she already has from dual enrollment classes and passing AP exams, she'll have plenty of time to be able to take on a part time job as well.

Now, I know she was disappointed as she really liked Roanoke College's campus, and had she been granted enough money to attend without putting her in debt, she would have probably have gone there. What I liked most about it was that it was close to home. Frankly, I think it was more a "prestige" thing for her than anything else. I told her she should be proud of herself that she did get accepted, and not get down on herself just because she can't afford to go there. It took her about a day to lick her wounds, and I didn't let on that I was secretly glad her master plan had been thwarted. When she marched down the hall and informed me she was totally on board with this new plan, I just nodded my head. I always knew she'd be.

I've said it before and I'll say it again, if it's meant to be, it will be, so Roanoke College wasn't meant to be. Besides, in our family we never get anything handed to us. We have to work for everything, but we're tough, we know how to adapt, and everything happens for a reason. In the end, she's probably going to wind up back in New York City anyway. The salaries, and shopping, are better there... 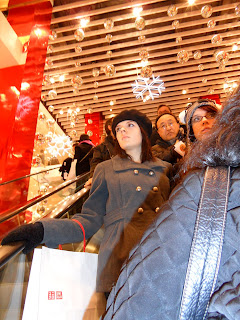