What's Going on With Amtrak in Roanoke? 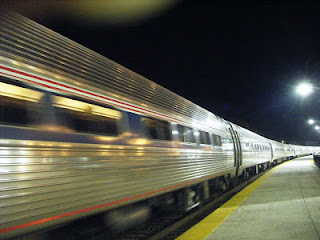 I know holiday preparations and celebrations are a good diversion to the sometimes less than favorable news of our fair city which of late included a councilman arrested for weed, and a mayor who's moronic remarks brought out far too many supporters of his stance, forever documented on video and in print, adding to the caricature of a backwards hick town that Roanoke is often portrayed as being. On Twitter we were called a "shithole." A little harsh.

Of course, there's not all bad news. Look over here at the shiny new ice-skating rink. That's lovely, especially for the smaller kids. Roanoke leaders must have felt pretty, pretty proud of themselves for accomplishing something that they think makes us more attractive. Oh sure, for the local families, it's a nice little perk, but it does absolutely nothing to attract businesses here. You know what might? An Amtrak station in Roanoke.

Wait, what? We are getting an Amtrak station in Roanoke! It'll be here in 2017. So, you say. I say don't be too sure. I was surprised to read this column by Hayden Hollingsworth in the Roanoke Star entitled, "Roanoke Needs Passenger Rail Service." In it he writes that complications have arisen concerning handicapped accessibility and the need to build a raised platform rather than have a lift for those who cannot navigate steps. Mr. Hollingsworth wasn't clear on who decided that, but upon Googling I found out the following: "On Sept. 30, the Federal Railroad Administration told the project team that federal officials believe a raised platform that would permit level boarding, without the need for wheelchair lifts, is required by the Americans with Disabilities Act."

From Hollingsworth article, "If built to the required specifications it would reduce the trackage to a single rail through Roanoke, an impossibility for continued operation of wide-load freight trains of which there are 50 or more a day." And then this as well, "The 611J, our international icon, will not be able to pass the level platform. What an embarrassment to have invested the money and interest in its restoration and then build a platform that will negate its use!"

Now, I don't believe Norfolk South cares one iota about the 611 not passing the platform, but I do believe that they will never agree to allowing a single rail through Roanoke. It's just not feasible for them as a business. Worse than the downtown station being delayed will be if the downtown station is never built. So I have a couple of questions for the city leaders and politicians who have crowed about being responsible for getting Roanoke its own Amtrak station...

Did no one know that a raised platform was mandatory?
Did no one know that using a lift instead would not be feasible?
How was it determined where the platform would be located?
What steps are being done to come up with a viable solution?
Can we really expect a passenger station in downtown Roanoke, and when?

I believe transportation issues (difficulty, cost, time, getting in and out of Roanoke) are a major reason why businesses are neglecting Roanoke, and no matter how many ice rinks, amphitheaters, bike & walking trails are built, a business is not going to locate here because of them. So stop fooling yourselves!  If this Amtrak station falls through it's just another spike in Roanoke's coffin. People need to stop looking at the shiny things of distraction and focus on keeping this city from becoming a real "shithole."

Yours truly,
A relocated damn Yankee
Posted by Elena DeRosa at 12:09 PM No comments:


"It's not so easy writing about nothing." - Patti Smith "M Train"

It's not so easy writing a review about "M Train" either. I picked up Patti Smith's latest memoir hoping the muse she has always been to me would emerge after I read it to inspire and lift me out of my writing doldrum. Instead, I found myself slipping deeper into it, and unable to even write an in-depth review. I decided to just highlight a couple of passages and throw in a couple of thoughts.

"Without noticing, I slip into a light yet lingering malaise. Not a depression, more like a fascination for melancholia, which I turn in my hand as if it were a small planet, streaked in shadow, impossibly blue." - Patti Smith "M Train"

It's hard to reflect on the past while living in a totally different present. And I, the invisible person sitting across from Patti at her favorite cafe, watching her daily routine as she nurses her black coffee, nibbles on brown toast with olive oil, making notes or compiling lists, find myself feeling sort of sad for her. Not for the glimpses into her past which many of us never had a view of before, but for the tales she tells of the present.

Drinking lots of black coffee, opening a can of sardines over the sink for dinner, binging on crime tv shows, and spending a birthday and New Year's Eve alone, seems like a routine not associated with anyone "famous." Even the times she is away from her NYC home traveling around the world it doesn't seem like she's "living the dream."

My cousin, who was friends with her mom Beverly when she was alive, says not to believe it. "That's just what she wants to portray," he says. "She always performs on her birthday and New Year's Eve. And she eats very well, she's friends with a lot of famous chefs. I could go on, so don't go feeling too bad for her." Okay then.

"Not all dreams need to be realized. That was what Fred used to say." - Patti Smith "M Train"

"Becoming a parent and being responsible for one’s own blood, a tiny helpless thing shifts our place in our universe. We find we are no longer in the center and our self-preoccupation forcibly dissipates. That is a good thing. One can maintain their ideals, their artistic vision, and sense of self while still relinquishing one’s place in the center. That is how we evolve. That is how we develop a sense of humanity, placing others before ourselves." - Patti Smith answering a question on Goodreads.

After reading "M Train" I feel even worse. Clearly, the days she spent with Fred seem like when Patti was happiest. How could I resent that?

"We want things we cannot have. We seek to reclaim a certain moment, sound, sensation. I want to hear my mother's voice. I want to see my children as children. Hands small, feet swift. Everything changes. Boy grown, father dead, daughter taller than me, weeping from a bad dream. Please stay forever, I say to the things I know. Don't go. Don't grow." - Patti Smith "M Train"

"All writers are bums, I murmured. May I be counted among you one day." - Patti Smith "M Train"

I don't think Patti has to worry about that. Congrats to her for making the New York Times Bestseller List again, like she did with "Just Kids." Unlike "Just Kids" which focused on the past, "M Train" dips into it. I'd say it's more of a melancholy memoir about nothing extraordinary, written beautifully, and leaving this reader wanting more. The way I see it there's three more books in Patti...2 more memoirs...The Rock 'N Roll Years, The Mothering Years, and a crime novel. The last will be the hardest for her to write, and the first one is the one I want to read most.

Why did the vulture cross the road? To get to the dead possum... 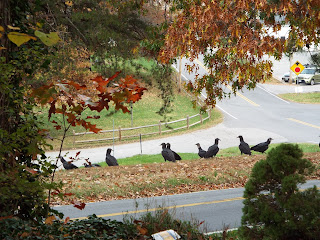 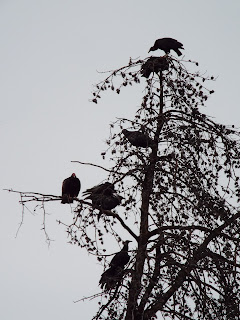 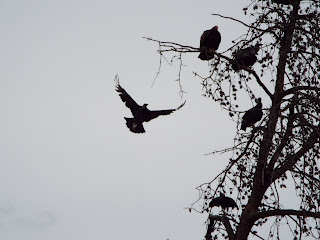 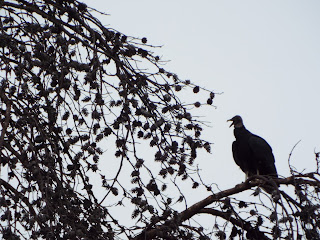 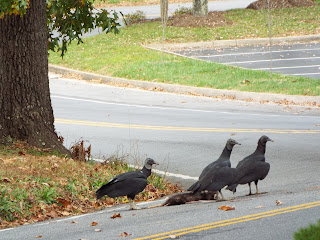 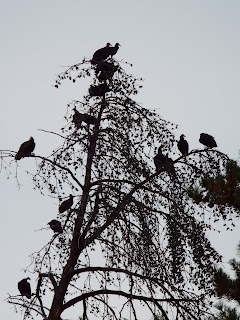 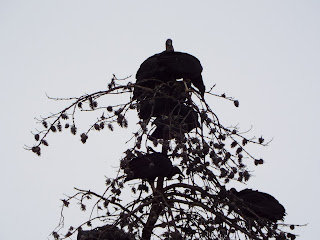 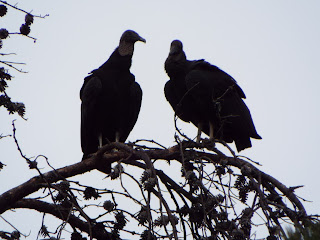 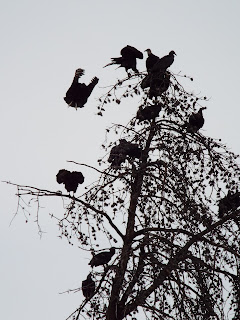 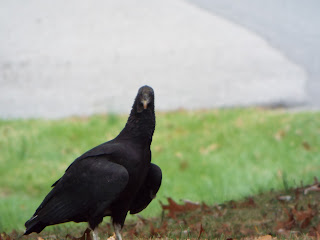 Posted by Elena DeRosa at 1:20 PM No comments: